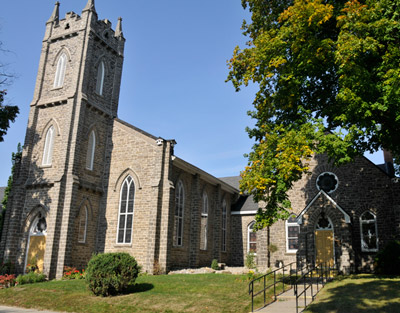 Our handsome stone building was constructed during the 1840's according to a design by L.G. Howard of Toronto, under the supervision of Benjamin Chaffey Jr. The same partnership was responsible for the nearby Leeds and Grenville Court House. Mr. Chaffey built a number of fine buildings which can be recognized by a band of stone (plinth) running around the building just above ground level.

The building was erected for the Congregational Church but in 1886 it was purchased by the St. Paul's congregation for the tidy sum of $5,500. A Parish Hall was added to the east side of the building in 1891.

St. Paul's was founded by a group of lay people from St. Peter's Church. With the purchase of the new building the twochurches became close neighbours. Samuel Reynolds was a significant figure in this movement and in the early development of St. Paul's.

The desire of the men and women who founded St. Paul's was to establish a church that would be evangelical and reformed and reflect the virtues of personal piety. In keeping with this desire, the church was a strong supporter of missionary activity. For many years the Rector was required to spend some time each year in some mission field. Characteristically, in 1886 funds existed for Divinity Students, Home Missions, Foreign Missions, widows and orphans, and the poor.

The original gas fittings used for lighting the church are still visible in the Narthex and in other locations. The Nave of St. Paul's, except for the ceiling, remains much as it was in 1852, as such it is one of Brockville's least changed historic buildings. The church interior receives a large amount of natural light from its many large windows. This is unusual for churches of this vintage.

In 1892 the interior of the building was decorated and three stained glass windows were installed on the west side. the remaining windows in the Nave are the originals. Fourteen years later, in 1906, major renovations of the church were undertaken, including the addition of the current Chancel and the Virginia Pine ceilings. Further stained glass was added over time. The three-section stained glass window in the chancel, showing the scene at Emmaus when the disciples recognize the risen Lord in the breaking of the bread, was installed in 1919. It is an extremely fine example of stained glass.

The current organ was installed in 1911 and by 1927 was wired for electricity. It was rebuilt and enlarged in 1957. A fine brass Eagle Lectern was donated in 1915. The Dyson Hague pulpit was installed in 1938 in memory of the church's first rector.

In the 1940s changes were made to the Chancel. The current Communion Table was installed, (the original was given to St. Paul's Church in Escott). A prayer desk was installed in 1945 to replace the solid oak desk of 1898. The communion rail was also replaced. It is beautifully carved to depict the crucifixion of Christ.

The church is just twenty-five feet eastwards from another historic site - the oldest railway tunnel in North America. It was started about 10 years after the church in 1854 and completed in 1860. It was used as a connecting link from the main line to the waterfront docks. The last steam locomotive used in the tunnel was scrapped in 1954 but diesel switching engines used the tunnel for another 10 years.

A new stained glass, boxed window was received and dedicated at St. Paul’s, Brockville on Sunday, May 1st. The window is the generous gift of Ian McClure now of Peterborough. The window was given to the glory of God and in memory of Ian’s parents, William John McClure and Mae Frances McClure.

As a youngster, Ian attended St. Paul’s and sang in the choir. Even though he has moved several times in his successful career in finance, he told the congregation that the values that he learned from the ministries of St. Paul’s had stayed with him throughout his career. The gift of the window is a small way of saying thanks to God and St. Paul’s for what was given to him and for his parents.